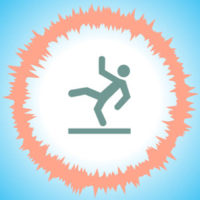 Many people have experienced a slip and fall accident in their lives. However, sometimes those falls occur on the property of a business, and serious occurs. This leaves the business, or owner of the property, liable to a lawsuit and potentially responsible for your injuries. Regarding slips and falls, Florida Statute 768.0755, enacted in 2010, has made it easier for businesses and property owners to defend themselves in slip and fall cases. The statute states that the victim must prove that the establishment had knowledge of the condition that caused the fall, and failed to do anything about it in order to prevent someone from falling and injuring themselves.

A recent premises liability case in Georgia, Richardson v. Mapoles, dealt with a woman who visited a fast food restaurant while the weather conditions were stormy. In order to enter the restaurant, there were two sets of doors. As she tried to open the second set of doors, they would not open, so as she pushed, she fell to the ground. The woman alleged that the restaurant was liable because the manager of the restaurant was negligent in maintaining the property safely. Georgia’s slip and fall statute is extremely similar to Florida’s, in that the burden is on the plaintiff, or victim, in proving that the business owner or property manager was negligent in not maintaining the premises safely. The court ruled in favor of the fast food restaurant, stating that there were not sufficient facts to support that the victim’s fall occurred because the property was not safely maintained. Also, harming the victim’s case was her statement regarding the fall, where she said that everything happened so fast and she could not point out a reason as to why she fell.

A Florida case, Trainor v PNC  Bank, dealt with a woman who fell into a hole due to construction on a bank’s property. She was attempting to use their outdoor ATM, which had construction surrounding it. There were signs for customers to walk in order to avoid the construction, and the woman followed those signs but still fell into a hole and broke both her foot and leg. The woman brought suit against the bank claiming that they failed to adequately warn of the dangers surrounding the construction. The court found that the bank was negligent in safely maintaining their premises. The defendant, the bank, argued that they should escape liability under the obvious danger doctrine, which protects businesses from suits where there is an obvious danger that the plaintiff should have taken reasonable care to avoid. However, the court ruled that even if the doctrine did apply, the bank still had a duty to maintain their premises in safe conditions.

If you or a loved one has recently been injured in a slip, trip, or fall, contact an experienced attorney at the Spencer Morgan Law Firm today. A team of seasoned lawyers will guide you through the complex Florida laws and get you the justice that you deserve.